North Las Vegas, Nevada, the fourth-largest city in the state, sits north and east of the city of Las Vegas, and is one of Nevada’s fastest growing cities. Incorporated in 1946, the city has traditionally been a hub for warehouse distribution and manufacturing, but is quickly becoming home to a booming tech industry, including solar and green technology, custom manufacturing technologies, as well as a variety of other tech businesses. Speaking of solar, North Las Vegas enjoys sunshine over 85% of the year; the average temperature is 78 degrees.

Las Vegas — “the meadows” in Spanish — was a name given to the valley in the early 1800s by a trading party en route to Los Angeles from New Mexico. There were a large number of naturally-forming wells in the area, fed by the Colorado River, that created extensive areas of greenery throughout the valley.

The entire Las Vegas Valley tends to grow as one unit, with Henderson, North Las Vegas, Centennial Hills, Summerlin, and Las Vegas itself inextricably linked to one another. Growth has been consistent in the area since the incorporation of the city of Las Vegas in the early 1900s, though a postwar boom (helped by atomic testing and atomic tourism) and the rapid growth of the resort industry certainly didn’t hurt. This boom led to the rapid development of a number of residential and commercial areas throughout the valley, including a wide development of suburban homes in the cities surrounding the resorts and casinos of the Las Vegas Strip. 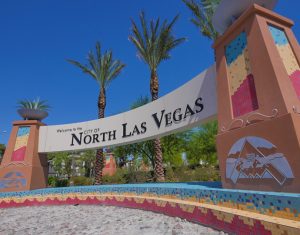 The city has an expansive network of parks, recreation trails and open spaces, with more than 30 parks covering more than 475 acres. Pools, ponds and spray pads are included in six of the city’s parks, while other features include tot lots for the young ones, shade structures, paved and lighted walking paths and demonstration gardens. The Nature Discovery Park, a 20 acre park with a dinosaur-themed kids area, is one of the most popular recreation amenities available in the city.

As well, there are three recreation centers — the Neighborhood Recreation Center and Silver Las Vegas Recreation Center — each coming with a well-equipped gym and recreation area, as well as offering a variety of fitness classes. The third rec center, SkyView Multi-Generational Recreation Center, opened recently under contract to the YMCA and aims to focus its classes in a way that brings all generations together.

There are 10 miles of regional trails along the Upper and Lower Las Vegas Washes. These trails are paved and connect with Southern Nevada’s “Neon to Nature” regional trail system, allowing for easy access to hiking and biking opportunities.

There are 3 libraries in the city, each offering adult and children’s programming, meeting rooms, downloadable media and public access computers, as well as the expected books, newspapers, magazines, and DVDs. There is free WiFi at all three libraries as well.

For the thrill seeker, the city operates its own airport, from which tours to Nevada’s Grand Canyon are launched.

The city’s bus service is provided by RTC Transit, connecting the city to the Las Vegas metropolitan area. I-15, Las Vegas Boulevard, Clark County Highway 215 also run through the city, provided easy access to a number of amenities and entertainment venues.

The city has excellent fire and police protection.

City government is of the council-manager variety, with four council members and the mayor. The mayor is elected by the city at large, while the council members are elected specifically by their wards. The city also has two elected municipal judges.

The Cheyenne Campus of the College of Southern Nevada operates within the city, covering nearly 80 acres and providing a wide selection of educational courses. The city is also planning for an expansion of the University of Nevada on the eastern side of the city.

The Clark County School District which operates the primary and secondary public schools in the city is the fifth-largest in the country. The CCSD is also a primary employer within the city.

North Las Vegas, Nevada, is a fast-growing city primed to come into its own very soon. In the meantime, the city allows access to all that Las Vegas has to offer, without any of the headache.

Call us for a comprehensive market analysis of your rental property.

Our property management team specializes in residential areas throughout North Las Vegas, NV. We offer multiple services to take your rental property and convert it into reliable income. We have a thorough screening process that helps to identify the right tenants for your property. Our team works hard to keep both parties happy through effective communication, bullet proof lease agreements, and timely monthly rent collection. We offer maintenance services to enhance the property and ensure that it will retain or increase in value. We oversee everything, allowing you to sit back and relax and know that your property and your tenants are in good hands.

Contact us today if you are ready to receive a comprehensive analysis of your rental property and to inquire about our North Las Vegas area property management services.